You shall not pass any further? 25 bps rate cut and silence of the doves

The Monetary Policy Committee (MPC) of the Central Bank of Iceland (CBI) has decided to lower the Bank’s policy rates by 0.25 percentage points, from 3.75% to 3.5%. The decision is in line with analysts’ expectations, who beforehand had all forecast that Ásgeir Jónsson, the new Governor of the CBI, would start his term off with a bang, or a rate cut in this case. As in June, the decision was rationalized by tighter monetary stance between meetings, due to falling inflation expectations, and improved inflation outlook. Thus, faster subsiding inflation and stronger anchoring of inflation expectations offset smaller economic contraction than was previously forecast.

Examining every word, phrase, and language use of the MPC is an integral part of analysts’ work. This time around, the statement is brusque and short on treats. In fact, what the statement doesn’t say is more important than what it actually does say, as the forward looking guidance has undergone significant changes, silencing the dovish tone. Of course the policy decisions “will depend on the interaction between developments in economic activity, on the one hand, and inflation and inflation expectations, on the other”, just as the earth orbits the sun, but there is not one word on the “MPC’s considerable scope to respond to the economic contraction”, as has been the previous two statements.

So we ask, is the considerable scope not so considerable after all? According to the Governor and the chief economist of the CBI, interest rates can certainly be cut further, but if wage increases or inflationary pressures exceed the bank’s expectations, the MPC may need to wait a while, or tighten the monetary stance. In other words, further rate cuts are not as certain as before.

The new Monetary Bulletin which was published this morning was much more interesting read than the MPC statement. The CBI’s economic forecast has changed somewhat since May. First of all, the economic contraction in 2019 is expected to be smaller than previously thought, or 0.2% compared to 0.4% in May, despite a larger drop in tourist arrivals, and consequently a larger exports contraction than previously forecasted. The reason for the change, and the expected soft landing according to the Governor, is stronger private consumption growth and greater import contraction than previously thought. Thus, the CBI concludes that domestic demand seems to be more directed to domestic production, rather than imported goods and services.

The CBI expects GDP to contract by almost one percent in Q2. However, at the presentation this morning the chief economist acknowledged that hefty contraction in imported services, as reported by Statistics Iceland last Monday, exceeded the bank’s expectations. This raises the question whether the contraction in Q2 might be less than expected by the CBI. If that’s the case, it might push the bank’s forecast for the whole year up to zero, and perhaps into growth territory. GDP growth in 2019 could close the door on further rate cuts in the near future. 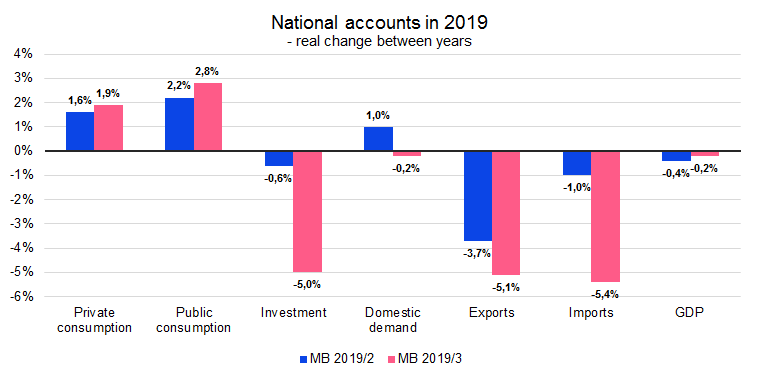 Inflation, where art thou?

The inflation outlook has improved in recent months and various positive signs have emerged in recent months. Yearly inflation currently is at 3.1%, compared to 3.4% at the end of Q1. Core inflation has also subsided, suggesting that underlying inflation pressures have eased and that prices are simply rising less than expected a few months ago. The CBI has accordingly lowered its inflation forecast for the second time in a row.

However, the world of inflation is not a bed of roses, as domestic inflationary pressures have risen in recent months, presumably due to wage increases and more expensive imports due to the weaker ISK. The MPC is probably watching domestic inflation more closely than other inflation measures, as its development should indicate the level of tension in the domestic economy, while imported inflation is largely characterized by foreign price development and the ISK. 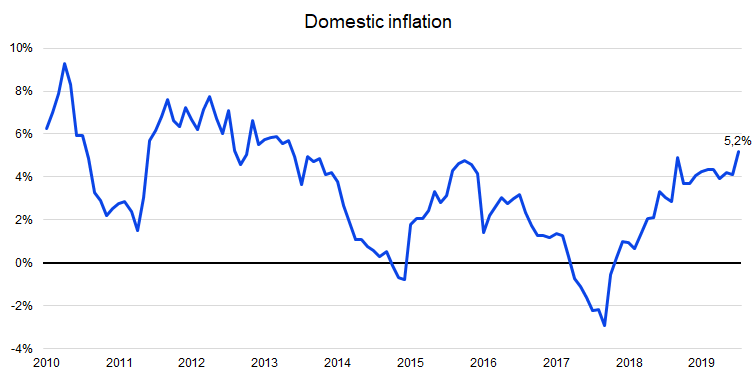 Further rate cuts according to Taylor

With the last two interest rate cuts, the MPC has continued to follow the Taylor rule. This is clear when looking at the graph below as the actual collateralized lending rate and the rate according to the Taylor rule make an almost perfect fit. As previously state, the Taylor rule is not our official interest rate forecast, just a game of numbers while trying to gain insight into the MPC’s mentality.

Based on the CBI’s latest economic and inflation forecast, the Taylor rule suggests further rate cuts this year, approximately 50 bps. Even though the CBI’s new macroeconomic forecast assumes greater contraction in tourism this year and a slower recovery than previously projected, we still believe that the rebound forecasted for next year, and national expenditure growth, will not allow room for a 50 bps cut in the next four months. The MPC’s tone supports this view, as the dovish tone has turned neutral. If the autumn proves to be difficult for the economy, we believe 25 bps to be the medicine the MPC will subscribe. 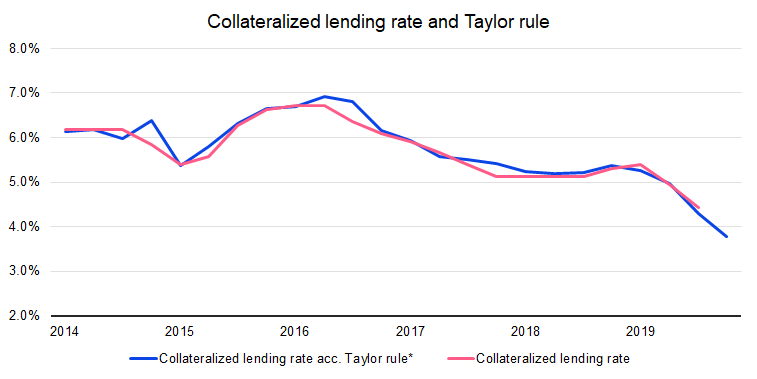