Arion Bank’s Chief Economist has published a new Economic Outlook for the years 2019-2022. GDP growth in the first nine months of the year measured 0.2%, far exceeding expectations. The outlook is for a milder slowdown than most expected, with 0.3% GDP growth forecast this year. However, the outlook for next year has deteriorated, due to slower growth in tourism among other things.

While business investment has suffered this year, housing investment has been going full speed ahead. Despite that, the investment level is expected to fall this year and remain at lower levels throughout the forecast period. Due to moderate housing price increases and a relatively stable króna, inflation is expected to stay close to the Central Bank’s inflation target in the coming quarters, enabling the Central Bank to lower rates further. Even though the new wage agreements are modest in historical context, wage ratios are high and continued rationalization measures are expected, leading to rising unemployment.

There are several indications that the Icelandic economy could be hard-pressed next year. Uncertainties in the global outlook could also put a damper on the economic recovery. The risk is therefore downward. However, the economy has seldom been as well equipped to handle a slowdown, with robust current account surplus, a fairly stable króna, low inflation and a historically good international investment position. 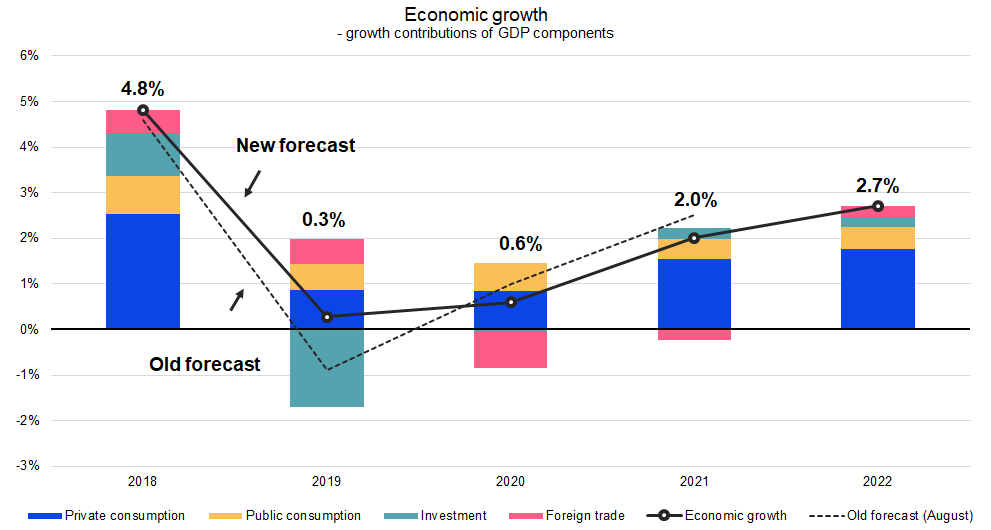